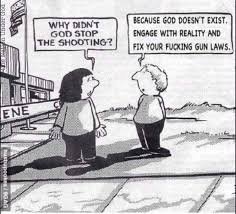 Innocents dead. Wasted. Perforated. Just out to have a good time, and because OMGWTFBBQBUTTSEX they had to die. People with families. Friends. Pets. Employers. Clubs. Dead. I have no connection except for being human, but I'm not sure I like that label too much anymore. Because humans suck. We suck. Virus with shoes indeed.

Churches celebrated yesterday. The death of gays, an awful lot of them Latino, at the hands of a brown guy, who could not be directly tied to Pat Robertson. They hallalujahed until they were hoarse.
The gun manufacturers ramped up the AR-15 lines again, they're going to sell a metric balls-ton of them in the next few days.
The republican candidate for president took credit for predicting this, then accused President Obama of, of course, another 'false-flag jihad taquito birthghazi.'

I wonder sometimes how these subhuman bastards sleep at night, and realize, with pain in my brain, that they sleep pretty well. There is death, beautiful, beautiful death, of people who ain't them. They sleep great. They have well oiled penis replacements tucked under their pillows or inside their shorts, and they sleep like babies.


(Disclaimer: Image is not mine, and I can't make out the artist. If anyone knows Imma happy to give him full credit, 7000pt. font and the contents of my wallet, 'cuz they's a whole buncha damn prophets. I apologize in advance about the contents of my wallet, mostly receipts, a few cigar wrappers, and a credit card of dubious provenance and dubiouser value.)
Posted by Rev. paleotectonics at 12:51 PM 2 comments: